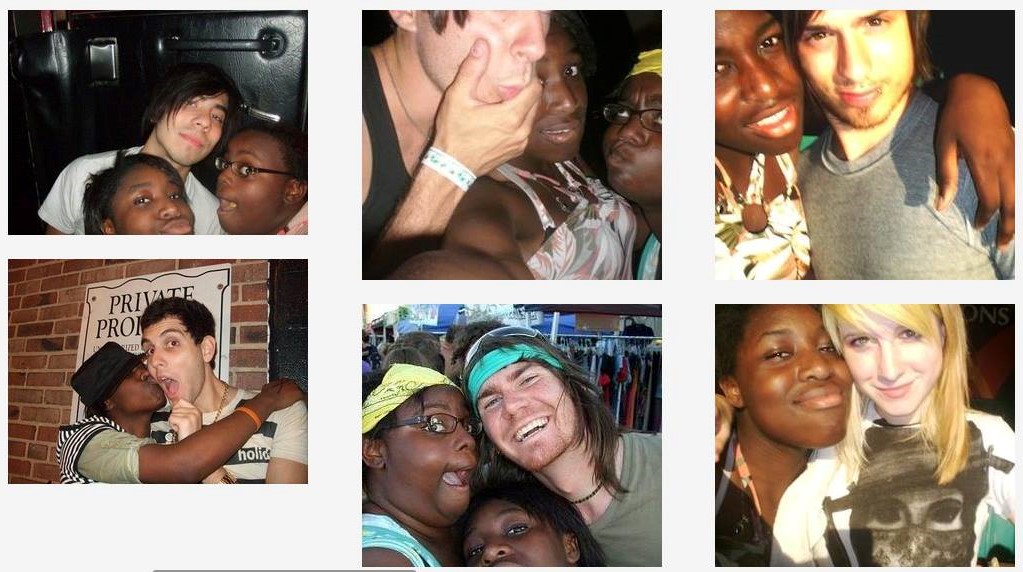 What I mean by that is, being in music is not like being a doctor or lawyer. There’s no test, there’s no degree, there is no governing body that gets to tell you you’re officially in the music industry so if you want to be in, you have to just do it. If you wait until you have whatever you think you need like a degree, someone’s co-sign or the right job, you’ll be competing against people that have 5+ years of experience for entry-level roles.

I’m saying all of this because last week I went to When We Were Young Festival and it felt so surreal because this was my entire world growing up. I grew up going to pop punk shows, going to at least a week of Warped Tour, and running a magazine about this world. I never outgrew it, my world, and subsequently my career, just… grew bigger around it.

Whenever I do interviews or talk about my career, I usually say something like… I got my start booking shows at 15, ran a magazine & filmed a documentary about pop punk, did my undergrad in Music Business & Journalism, and got my first full-time job in music tech at a ticketing company. I kind of gloss over it because everyone usually just wants to hear about my time at the major label or my time in tech.

But age 15 to 21 is why I do what I do now, so I wanted to actually take some time to talk about it. I want to call out some of the people who took a chance on me, all the opportunities people gave me (probably against their better judgment!) and why just saying yes and going for it made all the difference.

I knew I wanted to work in music since I was a kid. I remember watching the MTV Music Awards and seeing the artists get on stage to thank their mom, God, and then a list of other people. I remember even very young thinking, “how do I become one of those people thanked?”

So when I went to my first concert at 14, I slowly started to see this was possible. In the course of a few months, I saw Good Charlotte, Simple Plan, and New Found Glory in progressively smaller and smaller venues and it changed my life. The bands hung out after the shows, the local band that opened up shows or just came to watch were always keen to chat.

As that world opened up more, I went to smaller shows where in addition to national touring bands, I was seeing the bands from Baltimore, where I was from. So grateful to my parents who would drop off their 15-year-old daughter all over the city to see these bands. I started running the street team of a local band at around 14 or 15 and got my start doing street marketing and then digital marketing primarily on MySpace. I started making friends with the bands, making flyers, selling concert tickets, and just volunteering to do whatever they needed.

So in 2005, all my friends were having their 16th birthday parties and I started planning mine too. I booked a show. My 16th birthday was headlined by All Time Low. Whenever I say this, I caveat it by saying it sounds much more impressive now than it did then. Back then, they were just the kids from the same town as me that I saw most weekends on stage or just in the crowd at a shows. I booked a set of 6 bands and literally sent each one of them AOL Instant Messages (AIM) to ask if they would play. It was in the basement of a local church known for shows on the weekend and Will McCrory took a big chance to let me book this and a few more shows after it as well. I know I was an incredibly obnoxious 15/16 year old but he still said yes. It wasn’t a huge venue but I did a whole lot of marketing for it and it was a sold out show!

So that show kind of changed everything. I started my magazine right after that called Scene Trash Magazine and continued to book shows. It was the heyday of pop punk in a lot of ways with bands like Fall Out Boy and My Chemical Romance on the radio but for every Fall Out Boy there were hundreds of other bands trying to get their break. Those were all the bands I loved.

Back then, we were all so young and everything felt enormous. The thing was, pure pop and hip-hop still ruled the world. The bands considered scene royalty were barely a blip on in the mainstream music industry. For context, Fall Out Boy’s “Sugar We’re Going Down” came out April 2005 and My Chemical Romance’s “I’m Not Okay (I Promise)” was out September 2005. “Sugar…” placed # 40 on the 2005 Year End Billboard singles chart and “I’m Not Okay…” didn’t appear on 2005 or 2006. I would say the cultural impact of these bands goes beyond the charts but that’s a different article.

But what this meant in practice is, it was the wild wild west in a lot of ways. The people A&Ring these bands, the people booking the shows, the people writing the articles, the people making the marketing plans, the tour managers, the execs attached to the projects, the boots on the ground doing street marketing, and of course most people on the stages were all basically… kids.

When “I Write Sins Not Tragedies” came out in 2006, Panic! At The Disco’s lead singer, Brendon Urie was just 18 years old. It was an incredible time. Until a band was huge, the big label execs were much more concerned with Justin Timberlake than anything we kids were doing so we basically got to do whatever we wanted…

Working in the “Industry”

So, I found myself at 16 years old running a magazine about these bands. By the time it ended, I had a staff of 12 girls that spanned the US East Coast from New York to Florida. I was regularly interviewing bands like We The Kings, The Starting Line, Hellogoodbye, Metro Station, Cobra Starship, and of course, our hometown heroes, All Time Low (I believe we had them on 2 covers over the 40 issues released). I made amazing friends, made an incredible professional network, and got to “play my little part in something big”. I would email a label exec or a publicist who, looking back was probably only about 5 minutes older than me, ask for a press pass and an interview and it was shocking how often they said yes. Big shout out to Joyce Mealey for always answering my email.

Speaking of which, labels like Fearless, Hopeless, Victory and the infamous Fueled By Ramen were where everyone wanted to work. Without knowing him personally, I remember thinking Johnny Minardi (A&R at Fueled By Ramen) had the coolest job in the world when I was 17 (he still does). This is also how I discovered all of those jobs that existed outside of marketing and A&R. I watched Nano Tissera absolutely crush it as a manager during this time (he’s also still crushing it).

The possibilities felt infinite during these years and going to my first Warped Tour felt like being welcomed home. Over the years, I did interviews with bands during the tour, sold my magazine at merch tables, and met another person that was pivotal to my career. Bethany Lynne Watson, who was the press coordinator on the tour for many years took me under her wing and let me soak up all of her knowledge (and made sure I didn’t starve each day on tour). I got the opportunity to talk with the founder Kevin Lyman a few times each year and was all the wiser for it. It was like the final exam of each year to see who I knew, what I could do, who I could ask for help, who I could help, how far I could go and how much bigger this whole world could become.

It was always a possibility that it would all end one day and I’d have to get a “real” job but at the time it just felt infinite and we all felt at the top of the world. Once in a while, one of our little scene bands would open up for the big dogs and I got to meet those bands I watched on MTV as a kid like Third Eye Blind, Fall Out Boy, Good Charlotte, etc. Little 19-year-old me trying to keep it cool talking to Joel Madden about The Orioles backstage at a gig that I was actually working at when 6 years earlier I had his poster on my wall. What a time to be alive.

I was in undergrad through almost all of this and towards the end of university, I ended up working part-time for Atlantic Records as a contractor running their street team for a brief period. I also got a grant from my university to film a documentary about how social media changed the way people interact with musicians, focused on pop punk bands. It was called Always Wanting More. It is a very terrible quality 90 min film but was filmed partially on Warped Tour and felt like a culmination of everything that happened to me over the previous 6 years.

I’ve talked a lot about right time, but the right place was also a big part of it. People tend to think they’re at a disadvantage by being outside of a major music city but being in Baltimore had so many upsides. One, I could easily go to a show in Philly, NYC or DC and still make it back home at a reasonable time to be up for my 10am class. It meant I could have meetings in NYC (which I did often while working with Atlantic). It also meant there was always a guest list spot or a press pass for me. I wasn’t competing with Rolling Stone when I was in Baltimore. I made some lifelong friends because me and my friends were the ones that knew the only diner still open after the show ended and the band knew no one else in town.

I don’t think anyone’s thanked me on a stage at an award show yet but if you come across a CD from a pop punk band in the Baltimore area from 2005-2010, there’s a chance that myself or Scene Trash Magazine has a shout out. Those were the years that made me who I am in so many ways.

So What’s the Point?

I was at a big music conference recently and mentioned I was going to When We Were Young Festival. The person scoffed, disguised by humor, and took this holier-than-thou attitude about it. To this day, this music is ridiculed but created some absolutely amazing music execs and artists who cut their teeth under the hot summer sun at Warped Tour, it made an amazing community of people, a shared experience that you really had to be there for. If you know you, you know. If you don’t… well, you don’t.

I’m writing all of this to say it’s possible. If you want to do something, do it. Yes, it takes a lot of luck, it takes a lot of grit, it takes a car breakdown on the side of I-95 on the way to Bamboozle Festival, it takes a lot of sleepless nights, it takes writing papers on your phone between sets at a gig, and it takes a lot of people taking a chance on a literal teenager but do what you’ve gotta to do for what you love and I continue to do so. Obviously, I went on to work for major labels, sitting in meetings with literally global pop stars, but at heart, I’m always that little pop-punk kid screaming along to Paramore.